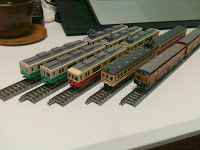 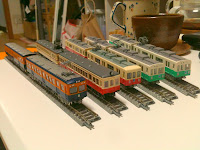 In this blog, I've been writing about all sorts of stuff, srs business, not so srs business, but now it's about to get down. One of my biggest passions in life: model trains.

I liked trains ever since I was a kid. Riding them, the sounds, the experience, the landscapes, but most of all, the rolling stock. On a modern commuter line, modern and efficient rolling stock should be used. On a high-speed line, sleek and fast trains, etc. etc. Every train is made for its purpose, but sometimes they end up being used in a completely different environment for what it was intended. Especially on Japanese smaller private railways, you can often see old rolling stock from the big cities being used as shorter and slightly modified local trains.

A good example not too far away from where I now live is Izukyu railroad, where ex-Tokyu 8000 Type commuter trains are being used as local trains in 3-car formation. Prior to their transfer to Izukyu they were used on the heavily used Tokyu network, and now have a quiet and easy pension on the beautiful seaside of the Sagami-nada Sea. Another example are the 6000 Series trains that are now used on the Fujikyuko railroad. These 205 Series ex-JR East trains were used on the commuter lines of Tokyo and now last their days on the local lines at the foot of Mt. Fuji.

Anyway, they trains I collect have a somewhat similar history, but have a more radical origin. The trains you see on the left of this text were originally Nagoya Subway cars, running on a 3rd rail. A 3rd rail is commonly used on underground trains to receive power, but is very dangerous when used above ground where the public has easy access to the tracks (e.g. with level crossings). As you can see these trains now have pantographs for catenary power pickup. 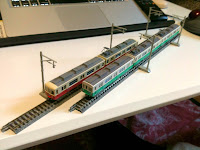 After the retirement from the Nagoya Subway, these trains (e.g. 250, 300 and 1000 Types) were transfered to the Takamatsu Kotohira Railway -'Kotoden' in short- to serve on the rural standard gauge network of Shikoku. The trains had to be rebuilt to overhead wire electrics, but that was about it. Aside from a repaint job and small modifications, these trains are still subway cars essentially. The thing I really like about these trains is that they are short, about 16 meters long. Ususally, train cars in Japan are 18 to 21 meters, not allowing them to use tight curves, but these are short enough to negate tram-style curves. 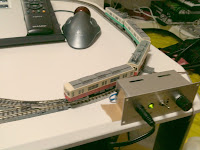 Now, I would like to create a fictional railway company with a complete collection of rolling stock. As these trains from the Nagoya Subway weren't all sold to Kotoden, I presume I could kind of 'save' some from the scrapper and use them in my roster. 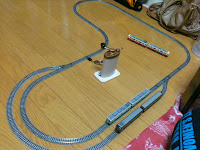 My collection is far from completed, since I plan to get a few more of these ex-Subway cars (I'd like to have at least 6 sets of 2) and maybe one or two locomotives and a few maintenance freight cars to have at least a minimum for a self respecting Japanese private railway company. Next to that, maybe a dedicated Limited Express train that matches the 16 meter length of these short trains. I'm thinking about the Nagano 1000 Series (4-car ex-Odakyu 10000 Type) released by Tomix some time ago. 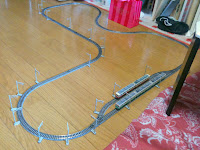 The trains for my private railway will all be repainted in an orthodox standard livery, so the attractive Kotoden colours will unfortunately disappear. The trains will also receive a unique registration number (OCD FTW). I'm also thinking about one or two trains receiving a semi-permanent commercial livery to add some variation to the fleet. This not only adds some visual variation, but also adds the atmosphere of a financially struggling company that tries to get by with a few extra commercial exploits.

Now, I mentioned 'orthodox standard livery'. I presume not many of you know what I'm talking about, so let me explain. Usually in Japan, when one speaks of this phenomenon, you talk about classic colour combinations that were used in the past by many companies. The most well known of these liveries is the crème-red combination. In different shades (the red ranging from bordeaux to orange/brown, and the crème ranging from snow white to yellow/light pink), this was the livery most used by almost all companies, with JNR (the former Japan National Railways) as the main example.

This colour combination was used on Limited Express trains (the most prestigious of all trains prior to the Shinkansen), so many local companies copied this livery for their own use. From narrow gauge diesel cars running through the cold of Northern Japan to luxury express trains in the metropolitan area, this livery was all over the place. Other examples of 'orthodox standard liveries' are of course the crème-blue (Yokosuka-livery), all dark-green or bordeaux-red (which was usual for private companies in pre-war times), or the obvious all-brown livery.

As for me, I have yet to decide on the final livery, but that will come once the fleet is completed. I'd probably go with a variation on the red-crème livery, not to make it too boring. For now, I'm too low on cash to invest any more in model trains, so I'll have to make do for now, Once I have a steady income, more trains will be bought and more updates on real things will come. For now, I can only fantasize and make plans for the future, but that's satisfying enough for me, since I like to dream (and make those dreams come true).

P.s. hover over the pictures for more info!
Posted by Unknown at 17:51